Researching ancestors believed to have been enslaved can be challenging, since the record trail is spotty prior to 1865. The 1870 federal population census, the first on which former slaves are listed by name, can be confusing because individuals with shared surnames may be family members or former owners. Even if one knows that an ancestor was born during slavery, work backwards from the most current census (currently 1940) to the earliest known record of the ancestor(s). Searching all known and suspected family members' births, deaths, and marriages, often identifies connections not immediately obvious.

Co-habitation records – available at the county level -- not only indicate the number of years a couple has lived together as husband and wife but also confirm the family belief that the ancestor was born in slavery. Other county records, such as deeds, estates, and tax lists, cemetery records, Bible records, and church records, can also contain valuable information. Freedmen’s Bureau, Freedman’s Savings and Trust Company records, and WPA slave narratives may also prove useful.

Slaves were enumerated on all federal census records from 1790 to 1860, but not by name. From the 1870 census (in which all persons were named), proceed backwards to the 1860 and 1850 slave schedules that list, under the name of the owner, each slave only by sex, specific age, and color. 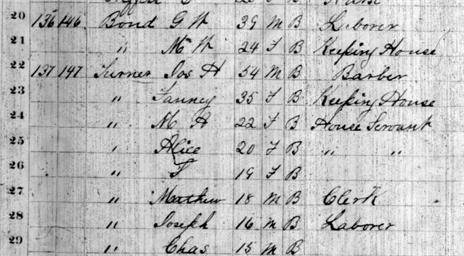 Because slave information is only available from their former owners' records, you will need to learn as much as possible about the owner and his family: his wife and in-laws, his children and whom each married, even the church he attended. One could acquire slaves through purchase, inheritance, marriage, and natural "increase" (the children, grandchildren, etc., of enslaved adults).

Records of slave ownership may be public or private. Public records are those created by the owner as required by local, state, and national governments. Local records, i.e., the county records in North Carolina, are the most fruitful for genealogists. These record marriages of owners, deeds of gift or deeds of trust of slaves, purchase or sale of slaves, transfers of land among family members, property, and records of actions in the local county courts.

The miscellaneous records of some North Carolina counties include some slave records. William L. Byrd III and John H. Smith, for example, have transcribed records for a number of counties in the series North Carolina Slaves and Free Persons of Color, published by Heritage Books.

Most early North Carolina county records are housed in the State Archives of North Carolina. County Records Box Lists show records for each county, whether original or microfilmed, that are available for research in the Archives Search Room.

Private records  (family Bibles recording their births or deaths [like the one at right], business ledgers, contracts, leases, and other records relating to the health and work of their slaves) are kept by owner(s). Since these are personal records are for private use, they may be difficult to find. Those that have survived may still be in the possession of the former owner's family, in a manuscript collection, or in an archives.

Records of white churches, generally held in their respective church repositories, are another category of private record to review, as slaves often were members of the local white churches or were permitted to worship at their owners’ churches.